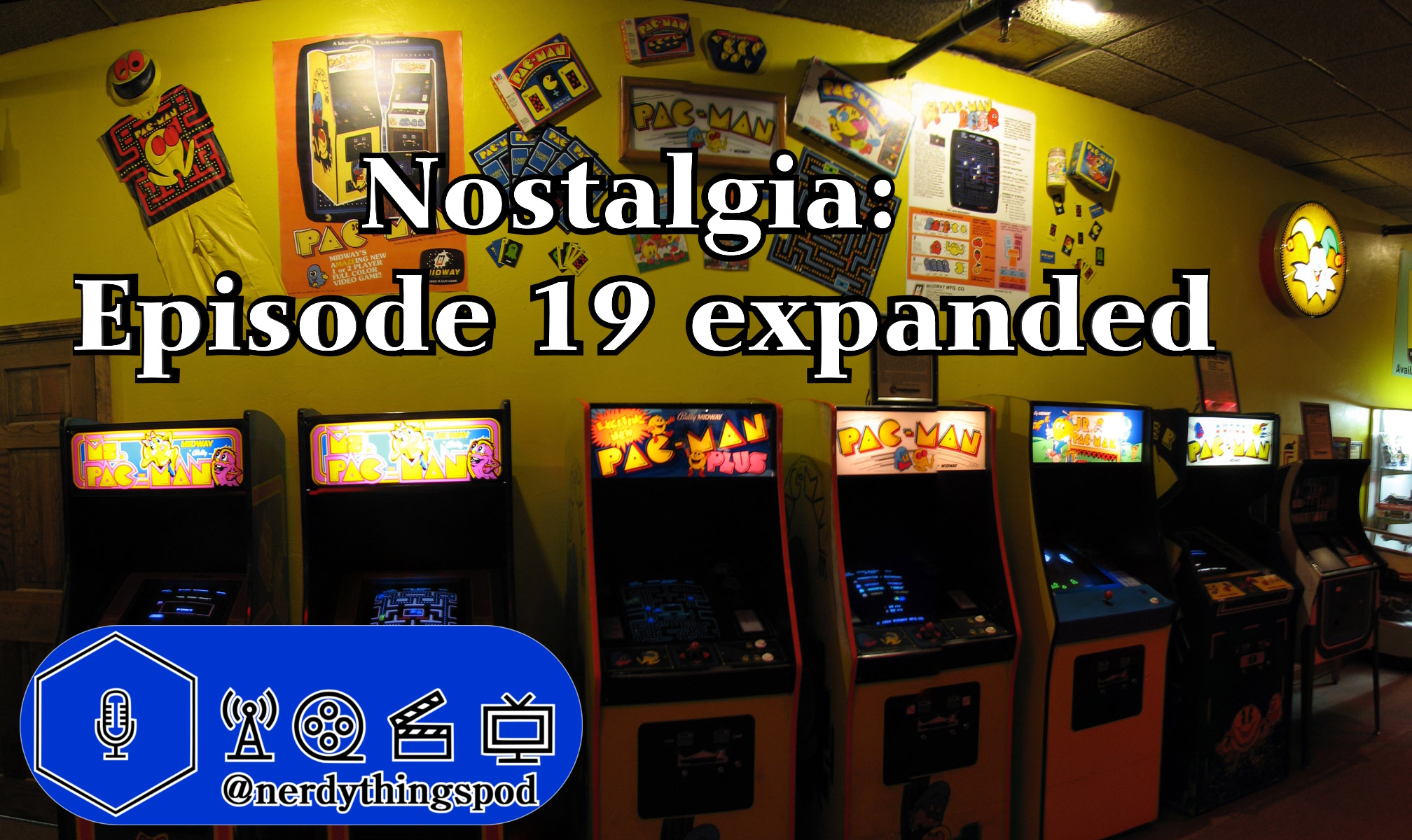 We all feel the longing for yesteryear. Intellectually we know it wasnâ€™t nearly as good as we remember, but that doesnâ€™t stop us from wistfully remembering the awesome song, book, cartoon, movie, event, etc. In episode 19 of the Nerdy Things Podcast, Kevin and Tim talk about nostalgia and some of their favorite things and it has inspired me to share some of my favorites. I donâ€™t want to copy the guys, but some things deserve a second and even a third mention..

The guys mentioned this, but it deserves to be mentioned again. The Mario Bros., during live action scenes, are the maintenance guys of an apartment building in Brooklyn. During the live action skits they would often have celebrity guest stars. The rest of the show would be devoted to a cartoon involving the Mario brothers, the Princess, and Toadstool defending the Mushroom Kingdom from King Koopa. These cartoons were usually riffs on movies or other popular media. Thereâ€™s very few things Iâ€™m as nostalgic for as the â€œPlumber Rapâ€ performed by Mario and Luigi (Captain Lou Albano and Danny Wells)!

Nintendo Entertainment System (NES) – YouTube – Wikipedia
You canâ€™t talk about the Mario Bros. without mentioning the NES. Iâ€™m going to channel my inner 80 year old here, â€œYou kids today are spoiled! In my day we had three foot cords connecting the controller to our gaming machines! We didnâ€™t have save points! We had 3 lives to beat the entire game and when those lives were gone, we had to start over from the beginning! If there were cheat codes or hidden secrets we had to learn them from our friends or pay $2.99 a minute to call a 1-900 number! Whatâ€™s a 1-900 number?! Hehehe, well itâ€™sâ€¦â€ And thatâ€™s enough of that I think. There are a hundred websites dedicated to the NES and its games. And the extraordinarily popular NES Classic Console shows that old it may be, but classics never go out of style. Now if Nintendo could only release all of their old games, like Golgo 13, Jaws, and Teenage Mutant Ninja Turtles, on the Switch.

I never read the original comic that inspired the cartoon, but I understand its very dark and nothing like the lively cartoon we received or the even the movie we got later. The original cartoon was one of my favorite things to watch. All of the Turtles had different personalities that so it didnâ€™t matter if you were a highly energetic, or quiet, or sarcastic, or serious, you could identify with one of the gang in green. Along with the cool toys, there was a FANTASTIC arcade game. The arcade game allowed up to four players to play as one of the four turtles and battle their way through the sewers and eventually to the Technodrome where you face off against Krang, the evil brain-thingie from Dimension X!

Goldstrike Arcade
Growing up we would sometimes go to Las Vegas, specifically the Goldstrike Hotel and Casino in Jean, Nevada. My mom would give my sister and I (5 and 8 years old, respectively) $20 each and drop us off in the nickel arcade they had, while she went off to play nickel slots. That $20 would last us all day. It lasted even longer when we discovered that my sisterâ€™s Goldstrike key chain, in the shape of Nevada, would trigger the coin slots into thinking a coin had been inserted!! I loved playing G-Loc, Off-Road, and, especially, Michael Jacksonâ€™s Moonwalker.

Moonwalker was a 90 minute movie based on the music of Michael Jackson. The video game, was in turn based on the movie. I prefer to describe it thusly, â€œan alien Michael Jackson goes around, touching children, while searching for his monkey, Bubbles, who will give him robot powers.â€ Yes, that is what this game was about. Children have been kidnapped by Mr. Big, and Michael must rescue them while beating up goons. When he would find his chimpanzee, Bubbles, Michael would transform into a robot with laser powers. When you were surrounded or in a dangerous situation, you could use Michaelâ€™s special attack where the music would change and the bad guys would act as Michaelâ€™s backup dancers before being blown up. The 80s were a great time!

Captain EO – YouTube – Wikipedia – IMDB
Speaking of Michael Jackson, Captain EO was a Disneyland parks 3D movie starring Michael Jackson, produced by George Lucas, and directed by Francis Ford Coppola that was shown from 1986 to 1996. And it was awesome. MJ is a spaceship captain of a group of alien misfits, who are given a mission to deliver a package to the â€œSupreme Leaderâ€ (Anjelica Huston) of a garbage planet. He then uses the power of music to turn the garbage planet into paradise.

The Witches was based on a book of the same title by Roald Dahl, the same author who wrote James and the Giant Peach, The BFG, and Charlie and the Chocolate Factory. Luke is an orphaned boy being raised by his cigar smoking grandmother who tells him of witches that kill children. While on vacation with his grandmother Luke finds that the Royal Society for the Prevention of Cruelty to Children who is holding a convention at the hotel is actually the annual meeting of the witches of England and that the Grand High Witch (Anjelica Huston) herself is there in attendance. I cannot honestly think of a scarier movie specifically made for children. It was great!

Support Kevin, Jules, and Tim on at http://www.patreon.com/nerdythingspod

Contributed by William W. – William’s nerdy credits include having once won a Warcraft lore argument in Stormwind General Chat on Draka Server in World of Warcraft.